*Please note that I only use peer-reviewed sources to draw my conclusions on Hurricane Camille’s intensity at landfall.

Hurricane Camille near maximum intensity on the afternoon of August 17, 1969. Sustained winds at this point were well into the category 5 range. The hurricane would soon enter a weakening trend and make landfall with winds under 155mph. 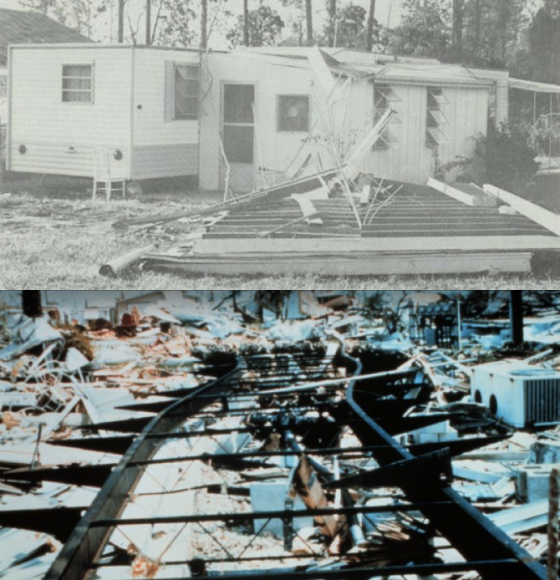 □ The internet has prompted the rapid dissemination of information about the infamous Hurricane Camille. With 190 mph sustained winds at landfall and a storm surge over 22ft, Camille appears to be an unprecedented event. Myths and legends related to the storm, such as the infamous (and fictional) “hurricane party” at the Richeliue Apartments, have entered mainstream media and rewritten the history surrounding the hurricane.

Hurricane Camille was last intercepted by Hurricane Hunters more than 150 miles south of its final landfall point near Pass Christian, approximately 24 hours prior to crossing the coastline (NWS, 1969). While rarely mentioned, this final offshore flight suffered mechanical problems and failed to intercept the storm’s eyewall, so the data regarding pressure and windspeed was estimated in order to fill the chronological gap. No reconnaissance flights were flown into the hurricane thereafter, so the 190mph wind figure has no basis in direct observation. Reanalysis has concluded, however, that Hurricane Camille was not a category 5 at landfall. 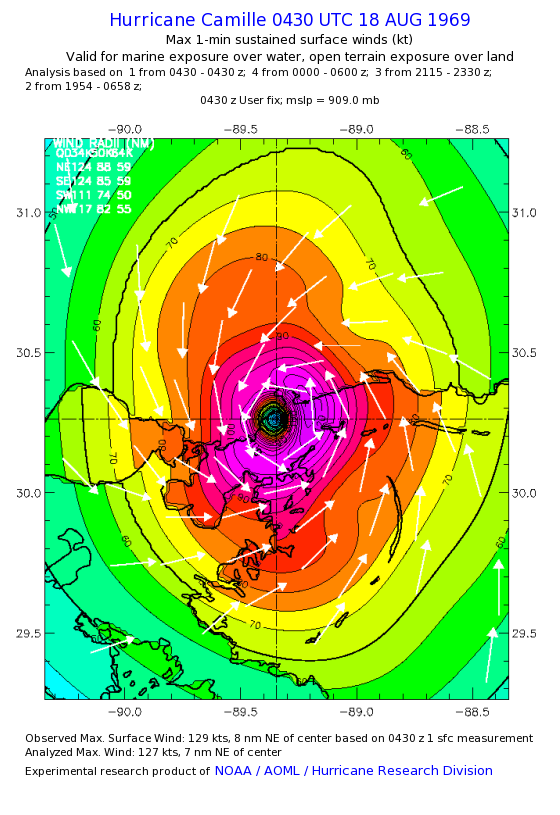 Hurricane Camille wind contour map showing maximum winds at landfall around 145 mph. Some meteorologists say these maps misrepresent hurricanes with multiple wind maxima like Hurricane Camille. Either way, it is certain that Hurricane Camille was well under category 5 strength when it crossed the Mississippi coastline.

A wind contour map published by NOAA reveals peak winds in Hurricane Camille were likely around 129 knots (148mph) eight miles east of the center. This release alone should have immediately led to Camille being downgraded to a category 4 storm, but no such action has yet been taken. The official NHC report on the hurricane actually says that “highest wind near the center were estimated at 160mph, with gusts to 190mph” at the time of landfall (NWS, 1969). In reality, the Mississippi coastline likely experienced sustained winds under 150mph.

The original NHC report on Hurricane Camille contains multiple inconsistencies. When mentioning the maximum sustained winds at landfall, the document never provides a definitive estimate. While the report mentions that damage in Pass Christian resembled “more the effect of a tornado than a hurricane,” aerial damage photographs show rather unremarkable wind damage. Strangely, the report also uses many “estimated” wind values whereas the NHC generally always uses only quantifiable measurements. Even more bizarre, the report does not mention multiple anemometer locations along the Mississippi coastline that were utilized in reports on other hurricanes that impacted the area in the preceding decade (it was standard for the reports to mention the maximum reading prior to failure when anemometers had incomplete data).

Coastal pine tree damage from Hurricane Camille near the area of maximum storm surge in Pass Christian. While it is commonly accepted that the storm’s landfalling pressure was 909mb, the circumstances surrounding the reading are questionable. St. Stanislaus College, located less than a mile away from the site attributed to the 909mb reading, recorded a minimum pressure of 944.8mb (Michael Laca, 2013).

It appears that Hurricane Camille’s legendary status has protected it from being downgraded. There is no debate over the fact that the hurricane was a category 5 offshore. As it approached the coast, however, the hurricane’s winds weakened significantly. Surface reports are congruent with winds at landfall being somewhere in the category 4 or category 3 range. A Transworld Drilling Company rig, raised approximately 100ft above the ocean, recorded a wind gust of 172mph near the most intense quadrant of the storm before the anemometer’s paper tray jammed (the cessation of the trace was not due to the anemometer failing in high winds). A National Bureau of Standards survey adjusted the gust to 144mph at 30ft elevation and found the highest adjusted sustained windspeed measured was 115mph (NBS, 1971). While the rig’s reading is impressive, the measurement was taken more than 70 miles off the Mississippi coastline. On land, the highest officially recorded gust was 129mph at Keesler Air Force Base in Biloxi (NWS, 1969).

A 1971 NBS report which examined the damage from Hurricane Camille’s storm surge and winds concluded that peak winds at landfall were approximately 125mph. The report discusses the various wind readings taken in the storm and the inaccuracies contained in the NHC report.

Damage from Hurricane Andrew at the Deering Estate, just north of Cutler Bay. Trees in the area were stripped completely bare or leveled to the ground. Tree damage was equally severe well-inland in areas affected by convection cells in the southern eyewall, such as Naranja Lakes. The tree damage following Hurricane Camille was significantly less severe.

Further evidence of Camille’s lower-than-reported winds at landfall are photographs of the damage in areas that should have experienced the storm’s maximum winds. Hurricane Andrew in 1992 caused much more intense wind damage than Hurricane Camille. Both hurricanes struck at similar latitudes and both hurricanes encountered similar vegetation, so the comparison is very valid. In Hurricane Andrew, pine forests were stripped of all their branches and leveled. Photographs from Pass Christian after Hurricane Camille show rather unimpressive damage to the coastal pine trees.

Hurricane Katrina behaved much like Hurricane Camille did 36 years later. Like Camille, the storm reached category 5 strength in the Gulf of Mexico and, like Camille, it weakened before making landfall yet still brought with it a tremendous storm surge. Katrina was significantly larger than Hurricane Camille, however, and the resulting storm surge was higher and much more encompassing. Long time residents interviewed along the Mississippi and Alabama coastline universally considered Hurricane Katrina the worse of the two storms.

Two additional views of damage in Pass Christian, where Hurricane Camille’s most intense winds swept ashore. The condition of the trees and homes unaffected by the storm surge is inconsistent with wind gusts over 200mph.

Views of damage in Pass Christian. An extensive photographic survey of the area concluded that nearly all of the wind damage was caused by falling trees. At right, buildings near the coast in Pass Christian. The lower floors were destroyed by the storm surge, whereas the upper floors suffered little damage. (Wood Structures Survive Hurricane Camille’s Winds)

Severe storm surge damage framed by standing utility poles, fairly undisturbed trees and a hardly-damaged gas station awning. While Hurricane Camille is often described as being a “tiny” storm, it was, in fact, much larger than the two genuine category 5 hurricanes to impact the United States – the 1935 Labor Day Storm and Hurricane Andrew.

Data collected from researchers indicates that Hurricane Camille impacted the Mississippi coastline with surface winds between 120mph and 145mph. Radar images of the storm verify the development of two concentric eyewalls in the hours prior to landfall, a structural change which dramatically reduced the storm’s winds while only moderately increasing the central pressure. The extreme intensity of the storm in the hours prior to landfall, coupled with the heightened vulnerability of the Mississippi coastline, led to tremendous storm surge heights in excess of 20ft in a small area centered on the town of Pass Christian.

Unbiased damage and assessment surveys failed to find structural damage indicative of winds in excess of 160mph. The NHC preliminary report on Hurricane Camille contained various inaccuracies and is not an objective source of information pertaining to the storm. Satellite imagery suggests the storm may have reached maximum intensity on August 16th while located approximately 400 miles south of Mississippi. While it is unknown why the official report deviated so radically from the realities of the storm, analysis from the 1960’s both in the Atlantic and Pacific tended to overestimate hurricane intensity. The storm is an excellent example of how easily misinformation can cloud “official” analysis of hurricanes or tornadoes.

*Perhaps the best resource for full-color images of Hurricane Camille’s damage can be found on the Mississippi Department of Archives and History account here. 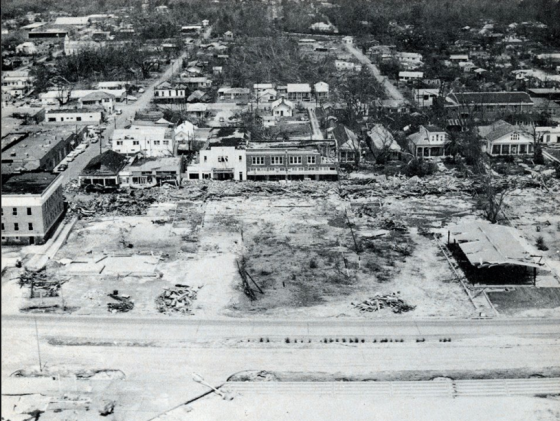 Aerial view of central Pass Christian, where the most intense wind and surge damage was documented. Hurricane Camille’s storm surge caused catastrophic coastal damage only superseded by the destruction following Hurricane Katrina in 2005.